Sunscreen to wear or not to wear?

I have a confession to make: I am terrible at putting on sunscreen.  I know I am a health promotion expert and I am aware of the sun’s harmful effects on the body but I am also a naturopath and I like to avoid contact with chemicals as much as possible.  This leaves me in a bind; do I choose the sun’s harmful rays or the chemicals in sunscreen?

As for my children, my sunscreen strategy used to be covering them with natural sunscreen but it left a really chalky residue (that they claimed made them look like ghosts…).  Now that they are older and aren’t fans of the ghost look, they have pushed me to buy the chemical sunscreen brands.  I get it, I don’t like looking like a vampire either but seeing that sunscreen is being poured on them a good 3 months out of the year I would like to know what these chemicals are and if there are any that we need to avoid.

Before we get into UV rays health risks and sunscreen composition, let’s start with safe sun habits:

What is the best way to stay safe in the sun? 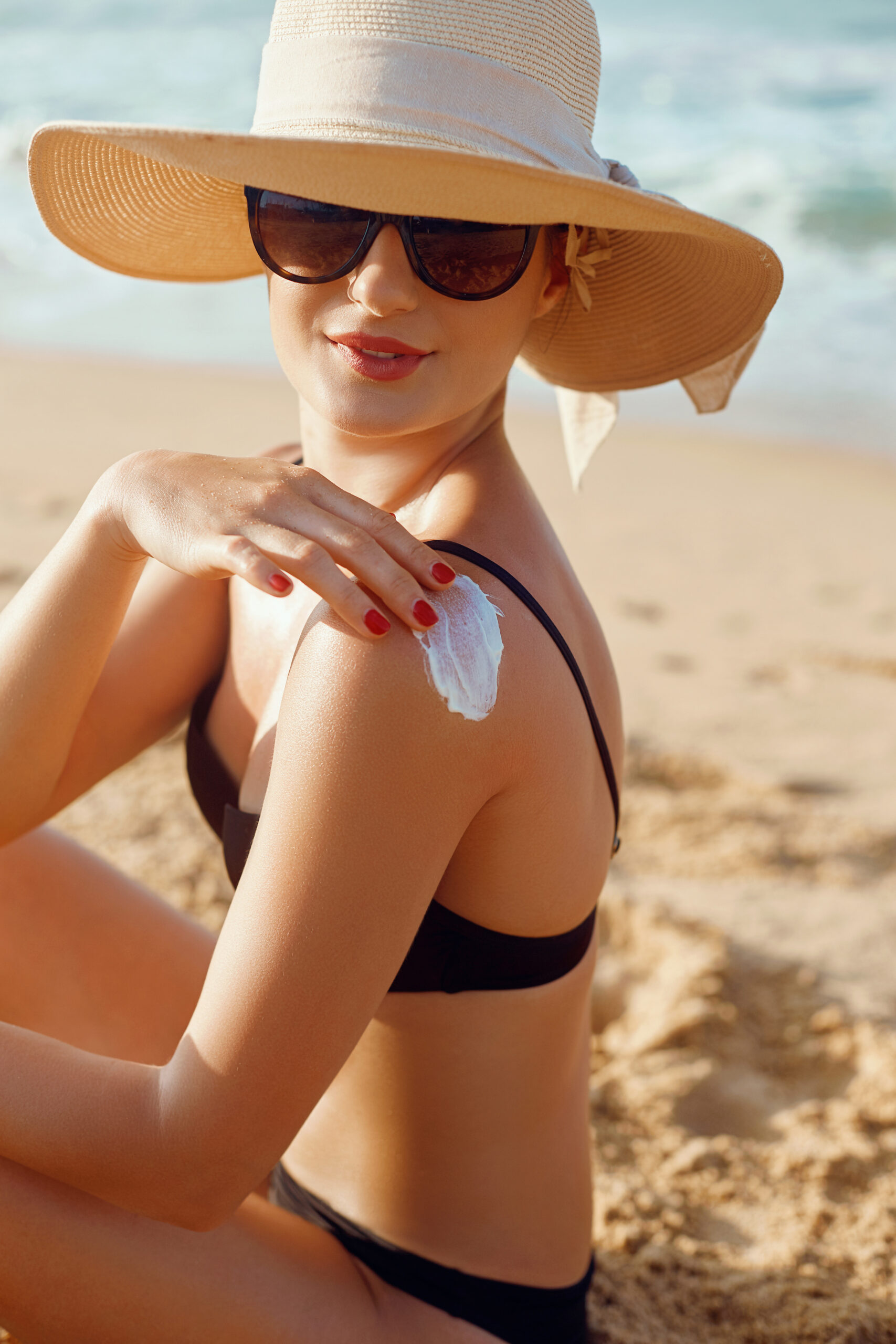 The reason why we are so concerned with sun exposure is because the sun emits UV radiation, which is the main cause of the most common forms of skin cancer.  The sun emits two types of UV radiations that cause skin damage:

Sunscreen is one mode of protection from the sun.  We often judge a sunscreen purely by its SPF strength but it is important to note that SPF is an indication of the sunscreen’s UVB protection and it does not account for UVA ray protection.

As discussed below, SPF chemical filters have been linked to health issues therefore, higher SPF sunscreens may have greater overall health risks.  When applied correctly, sunscreens of SPF 30 offer adequate protection even for people most sensitive to sunburn.  Research shows that there is very little difference between SPF protection of 30 and 50 as shown below:

As we saw above, it is also important to protect ourselves from UVA rays.  The European Commission’s regulations indicate that the UVA protection must be at least one third of the UVB.  In the US and Canada no regulations exist to control the UVA protection.  Studies on the matter demonstrate that on average, European brands for 50+ products have three times the UVA protection than the American brands.  For this reason, it is much more difficult to buy a full spectrum sunscreen in the US and Canada compared to other places in the world such as Australia, Europe and Asia.

1. Physical UV filters (or inorganic or mineral filters) sit on top of the skin without being absorbed by the organism. The EWG rates mineral sunscreen (containing zinc oxide and or titanium dioxide) higher than chemical sunscreen, mainly because there is little evidence that these go through the skin barrier.  They are NOT absorbed by our body like the chemical UV filters. Zinc oxide and titanium dioxide are the only two ingredients broadly considered as safe by the EWG.  However, these mineral ingredients show a few major problems:

2. Chemical UV filters (organic filters) work by absorbing UV radiation and converting them into safer radiation. These chemicals can stay in our bodies and little is known about the systemic exposure to these ingredients. Their major health concerns relate to disruption of the endocrine (hormonal) system as well as possible allergic reactions. Certain chemical UV filters have also been shown to be damaging to the environment and are banned in certain states and countries.  It is important to, as a minimum, read the ingredients label when shopping for sunscreen and avoid the  following five ingredients:

This is the most worrisome sunscreen active ingredient according to the EWG.  They recommend consumers avoid sunscreens with oxybenzone.  The European Commission found current human exposure levels to be unsafe and proposed a concentration restriction of 2.2 percent (SCCS 2020) – lower than the limited amount allowed in U.S. sunscreens, which is up to 6 percent.

It is also an endocrine (hormone) disruptor. In adolescent boys with higher levels of oxybenzone in their system, they were shown to have lower levels of testosterone.  Female exposure is related to higher risks of endometriosis and breast cancer.  Many other hormonal consequences are associated with this chemical.

Oxybenzone is also infamously known for being banned in many parts of the world including Hawaii, the Florida keys, Palau, Virgin Islands and Aruba.  Several studies, including the Archives of Environmental Contamination and Toxicology, have shown that oxybenzone, when washed off our skins, have the potential to destroy coral reef ecosystems.

Octinoxate has also been shown to disrupt the hormonal system, more specifically but not inclusively, thyroid hormone production and the metabolic system.  It also may be harmful to aquatic life.

Is readily absorbed through the skin at levels 14 times the FDA cutoff systemic exposure.  Although there was some evidence of octocrylene’s endocrine-disrupting potential, the European Union concluded that current use concentrations up to 10 percent were considered safe.  It is often contaminated with known carcinogen benxophenone and its’ levels can increase when stored, therefore extra care here to respect the shelf life of the product.

It too has been shown to potentially harm the coral health.

This derivative of vitamin A is used in many skin products including sunscreen and cosmetics.  The idea behind this is that vitamin A is good for the skin and manufacturers believe it slows skin ageing.  The problem with retinyl palmitate is that it may speed the development of skin tumors and lesions when applied to the skin in the presence of sunlight.   Want a safe alternative? Eat dark green and orange vegetables; remember the beauty of your skin comes from the inside.  It is not so much what you put on your skin but what you eat and drink that has a powerful impact on your skin’s health.

Fragrances may contain phthalates, chemicals linked to reproductive problems as well as asthma.

Do you know any American friends who stalk up on sunscreen in Europe?  They actually have legitimate reasons to do so.

Americans have fewer and worse sunscreen options than in Europe.  The FDA promised to review additional ingredients but has been stalling for decades.  The European Union has 27 active ingredients approved whereas the US only has 16 and according to top dermatologist the European options are better.

Any other reasons to avoid sunscreen?

Some experts believe that sunscreen impairs absorption of vitamin D, which is one of the biggest vitamin deficiencies in the world.  A panel of 13 leading experts in 2018 concluded this was not the case.

Another argument largely argued by dermatologist Richard Weller, is that UV rays mobilize nitric oxide in the skin.  Through this action, the sun is responsible for the lowering of hypertension and extending life expectancy.  High blood pressure, increases the risk of strokes and heart attacks and unlike skin cancer, heart disease is the number one cause of death around the world.   The problem is that sunscreen blocks the mobilization of nitric oxide.

There is robust evidence that sunscreen prevents skin cancer but our best sun protection remains physical shields such as clothing and shade.  Sunscreens chosen wisely; avoiding the above five ingredients (or ensuring a mineral base sunscreen), assuring it contains both UVA and UVB protection with an SPF around 30 is essential if we choose to be in direct sun during the peak hours of the day.

As for me, my new sunscreen strategy is to apply chemical sunscreen (that’s passed the above criteria) on our faces and apply mineral sunscreen on our bodies.  A bit complex but it seems to be working!  Happy summer in the sun to all!